Scarp is a proud partner in the Australian Research Council Centre of Excellence for Australian Biodiversity and Heritage (CABAH) – an innovative, transdisciplinary research collaboration that will unlock the environmental and human history of Australia, Papua New Guinea and eastern Indonesia and help inform the management of Australia’s natural and cultural resources into the future .

CABAH will train future generations of world-class researchers to deal with emerging global challenges and inform policy in an interdisciplinary context, and our ground-breaking research discoveries will be taken into Australian school curricula and shared with the wider community through an exciting outreach program. CABAHs research, education and engagement programs are funded for seven years by a $33.75 million grant from the Australian Research Council, $1 million from the NSW Government, and $11 million from participating universities, museums and other organisations.

Scarp Archaeology is the only commercial archaeology company invited into CABAH. You can read about the role of Scarp in this exciting work here 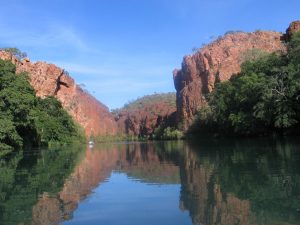 New fieldwork at Riversleigh in the Gulf of Carpentaria and in the Pilbara in Western Australia will seek to understand when and how Aboriginal people were able to settle the arid zone of Australia and from where they travelled. At Riversleigh Scarp will be working with James Cook University excavating a bunch of rockshelters along deep gorges that surround aquifer fed freshwater rivers; the area is a real oasis in the desert.

Previous work by Dr Michael Slack for his dissertation established the area to have been first settled at least 39,000 years ago and that people were able to continue living here during the height of the last Ice Age (the Last Glacial Maximum – LGM), by restricted their foraging range and concentrating on local resources. Together with new data, we will be bringing a team of geomorphologists and other specialists to better understand the landscape and the environmental history of the region.

In the Pilbara we are casting our eyes further inland from the areas where Scarp Archaeology usually works, whilst excavating a number of caves that we have already recorded during commercial work but under a research permit with the CABAH team. Further inland we plan to do some exploratory work, finding new sites and camping under the stars! 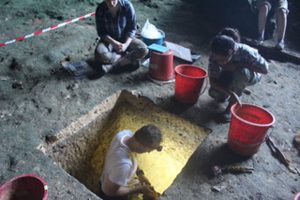 In 2017 Dr Michael Slack ventured into the tropics for the first time, assisting Professor Darren Curnoe at the University of New South Wales with fieldwork and planning for his Niah caves project, in Borneo. The Niah area features the largest formations of limestone karst caves you are ever likely to see, with caves large enough to park entire A380 aircraft inside! One cave excavated in the 1950s revealed evidence of human occupation from around 40,000 years ago.

Over coming years we hope to extend this record further, understand how this incredible landscape was used, and maybe even find evidence of other ancestral species! The project is just starting but by working collaboratively with the staff of the Sarawak Museum and local villagers we are looking to do some great archaeology, and provide high level practical training and skills to everyone. Read more about the project and follow the 2018 fieldwork here 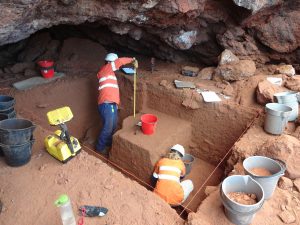 In 2015-16 the discovery of a significant cave over 40,000 years old on the edge of a mining area created a problem for our client and the Indigenous group (the Nyiyaparli people). It was one of only three sites known that were this old, making it of high archaeological significance. In collaboration with BHP, Scarp devised a research project with the Nyiyaparli aimed to find and then excavate new sites in their country; learning more about settlement processes, but also adding a new suit of similarly dated sites. Over 12 months we recorded 8 new caves that were all equal to or older than the original cave, and were able to chart the likely way that people first ventured into the region following the main river system and how they spread out over many thousands of years later. The project is a cornerstone example in Australia of creating something great from a problem. 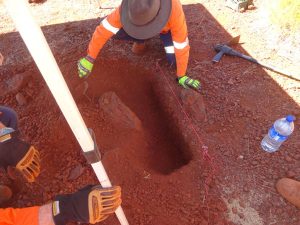 Ongoing work in the central Pilbara is examining the antiquity, spatial arrangement, location and hopefully ultimately understanding the reasons and functions of these little known site types that are found in great abundance in one small area of Australia. Scarp Archaeology has been completing differential GPS field recording, GIS analysis, and even attempting to date soils underneath stones in order to develop a comprehensive understanding of the stone arrangements. This exciting research in progress has already been presented as a paper and poster at National conferences by Boone Law .