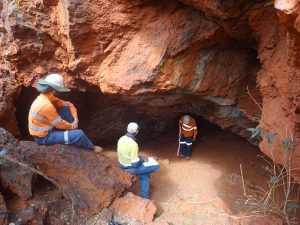 Scarp has worked for BHP at South Flank in the Pilbara since 2012. We have provided specialised advice concerning the significance of the area, completed survey, surface artefact analysis and collections, and salvage of many areas. This has included archaeological excavation of over 30 caves, some of which are dated at over 30,000 years old. We have also worked closely with the BHP heritage team assisting in consultation with Aboriginal representative groups in the development of this project. Our collaboration at South Flank has resulted in some amazing research projects, that have been presented Nationally at conferences and in academic papers. 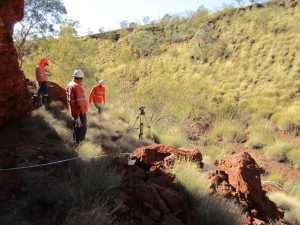 At Ministers North we assisted BHP again by completing detailed recording of over 100 previously recorded archaeological sites spread through some pretty rugged country. Despite a huge amount of complex, and largely uncontextualised data, we were able to revisit and re-record all the locations efficiently, working alongside the Banjima People, to provide reassessments that provided BHP with far greater clarity and certainty in planning and management of this project area. 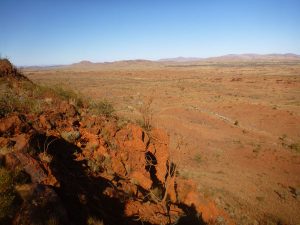 A massive field based assessment across the plains of the Pilbara for Rio Tinto completed in 2013-14. Pedestrian survey of 100% of a roughly 100m2 area, recording all artefacts and Aboriginal sites as we walked. Often in remote areas, with logistical issues associated with a large field team, very hot weather fatigue, we were able to complete the project quickly, and record hundreds of exciting new locations. The basis of this work is currently being adapted into an academic paper looking at the nature of tool stone and foraging behaviour. 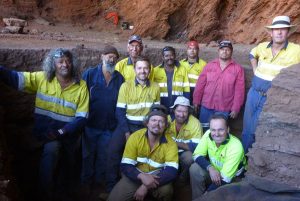 In 2008 Scarp excavated a cave at Brockman in the Pilbara for Rio Tinto. The site turned out to be as old as the last Ice Age (24,000 years old). In 2014 we were invited back to complete archaeological salvage of the shelter with the Puutu Kunti Kurrama and Pinikura people. Given a tight budget, and timeframe, and with an ever growing mine nearby, we were able to excavate over 20m3 of archaeological deposit over just 4 weeks. All by hand with tiny trowels, 5cm at a time! The results of the detailed excavations are amazing with the antiquity of the site occupation being over 37,000 years ago, and the sediment containing over 7,000 stone tools, wooden tools, and even organic material like paper-bark and hair. Results of this work has been presented at numerous International conferences including the 5th Southern Deserts Conference in Karratha with the PKKP people, and a scientific paper will soon be published. 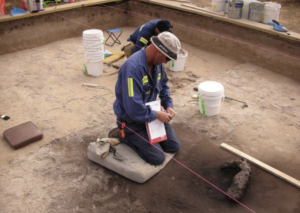 In 2011 Scarp completed most likely the largest archaeological excavations ever attempted in the Hunter Valley. Previous assessments indicated that there might be artefacts as old as 40,000 years but located about 3m deep in a large sand dune complex on the edge of the Warkworth mine. The challenge set was how to safely excavate a large enough area to determine if there really were artefacts that deep and then work out how old they were. In just six weeks Scarp with 12 representatives of numerous Aboriginal groups excavated four large 25m2 areas in a series of ‘benches’ to 2-3m deep, all by hand, and all sieved through 5mm and 2mm mesh, so that no artefacts were lost. We examined the nature of artefact movement through the sand through conjoining, and assessed the age of the sand sheet by using optically stimulated luminesence dating. Besides the great science and archaeology, this project involved the largest number of buckets you are ever likely to see… about 1,000!